I debated many months before finally registering for this race. I started training in January even though I had not made the official commitment. Should I register for an early 50 mile race and train throughout the coldest months? I was concerned that all the training and the race itself would burn me out before the season even began. I now no longer have to be concerned about that. My training went well and the race went even better!

It is finished! And has left me with a wonderful feeling of accomplishment.

In a way this race was easier for me than Surf the Murph was last October which was my first 5O mile finish. This race allows no pacers but I knew that there would be others that I could run with during the race. I found myself on the trail alone at times but this did not bother me in the least.

The race begins at 12:01 am on Saturday. You have 18 hours to run 3 loops about 16.8 miles each with a total elevation climb of roughly 9,000 feet. This is a new race start time for me and I was looking forward to the night running. I have limited vacation at work so worked Friday until 3 and headed out to Zumbro after figuring I would have a better chance of sleeping at the start/finish area of the race than trying to sleep at home. I arrived around 4 pm after first picking up a Dominoes pizza for dinner and a pre-race snack. 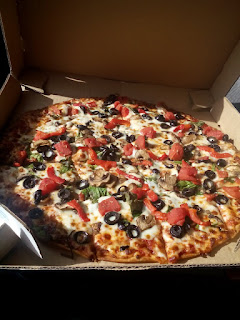 The plan was to hang out for a bit, check on fellow runners in the 100 mile race and then head into the minivan for as much sleep as I could manage. Six hours would have been great but I knew nearly impossible as who goes to bed at 6 pm listening to cow bells and commotion happening just outside the van doors. I must have fallen asleep at some point as I woke up several times over the next several hours. My plan was to sleep until 11 and then get ready but I finally got up at 10:30 and started getting dressed early.


I had thrown all seasons of race clothing in the van. Temps were predicted to get down to 18 degrees that night and I was still trying to figure out what clothing would be best. One of my biggest fears is being too cold so I do have the tendency to overdress. This time, however, I made very good choices in clothing. I chose to wear the winter tights, winter running shirt and winter running jacket with winter mittens, winter hat and of course a buff for my face and chin. This clothing choice worked well for two full laps. It was cold!!

I started the race out with Jamison and Angela. I could not find Sally at the start line so our plan to run together did not happen. While waiting for the race to start my feet got very cold and it took several miles for them to finally thaw out. The first mile requires some major power hiking up that first big climb and that helped get the blood flowing again. After cresting the hill we came to just about everyone's favorite spot that I have heard referred to as hobbit woods. The trail conditions were dry and it made the running easier than in past years when they were muddy and slick.

That first aid station comes quickly. Jamison is familiar with my getting out of aid stations quick and after attempting to quickly drink a coke slushy and getting a brain freeze we were out. (That was the last coke I attempted to drink during this race.) I lost Angela and she must have gotten out ahead of us.

I felt really good on loop one. We hit each aid station and I mostly drank coffee or chicken soup for liquids. I noticed I was not drinking much of my water which I tried to change by making myself drink more between aid stations. It is harder to drink water on cold runs for me. I finished up the first loop about 15 minutes ahead of my projected pace at around 5 am. I was ready to head out on loop 2 and I could not find Jamison so made the decision to head out. It was still very cold so I did not shed or change any of my clothes. My hands got very cold at the aid station attempting to eat so a  volunteer offered me her heat packs to put in my gloves and it felt great.

I hit that that first climb and came upon another runner whom i did not recognize in the dark. She had been running with a friend who had dropped after the first loop. We ran together and were talking and whatever she was talking about made me turn to her and ask who are you? We had a good laugh when we realized that we knew each other already. It was Victoria. We reminisced about how she ran with me when I completed what I refer to as my accidental 50k. I was running Chester Woods at a fall 50k or whatever fatass intending to run long for my marathon training and ended up running the full 50k instead. I reminded her that she was a major factor in me running the full distance. We ended up running most of this second loop together or leap frogging each other as we made our way through the loop. We witnessed the sunrise and celebrated when we were finally able to take off our headlamps. Over 6 hours with a headlamp and running by artificial light gets irritating after awhile. 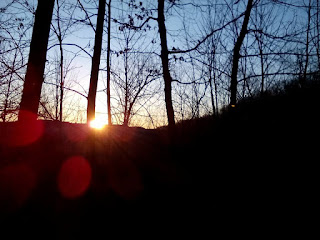 I finished up loop 2 in a total of 10:16 hours on the trail for 34 miles. I came into the aid station and was happy to see some familiar faces in Dave Shannon and Rob Henderson, who had already finished his 100 mile race. I also saw Mike which was a nice boost. They helped me get food and water in my pack and I went to change out of my winter running top as it was now starting to warm up some. Not a lot but enough to require a change. I debated changing out some socks as my toe on my left foot was starting to hurt but decided against it in the end. I had started to experience some chaffing so grabbed the body glide to fix that problem before it got any worse.

My third and final loop was definitely starting to get slower. I was not hurting specifically but was feeling fairly fatigued. I started to experience a hot spot on my left foot and my shoes were feeling really tight. By the time I hit aid station 2 I figured it was time to see what the damage might be. I taped up my toe and the socks went back on. It was rough running for that next small loop as I had irritated the spot by messing with it. I got somewhat discouraged as this is a very runnable loop and I was moving way too slow. Then the pain started to recede and I was excited to hit aid station 3 knowing there was only one aid station left before the finish.

This was short lived, however, as the climb out of this aid station is tough. I hit my low point between miles 40 to about 45 as I had slowed down considerably. I started seeing my goal of a sub 16 hour race slip away. I ran much of this section alone. The climbs were difficult but running down Ant Hill was no treat either. I got my biggest surprise when almost at the bottom of Ant Hill I turned around and saw Jamison behind me. I was glad to see him and we started to run together yet again. We hit the gravel road and I was actually excited to be on flat ground again. From here on in there are only small hills and I was grateful for this. I slowly ran the entire road and decided that I would not stop at the final aid station. My watch had died but according to Jamison's watch we could still achieve a sub 16 hour finish. So we relentlessly ran/power hiked our way forward. Jamison was instrumental in keeping me moving forward at a fast clip. The last 4 or so miles I ran with negative splits. I was determined to stick with Jamison and knowing he would sprint across the campground had me groaning but my competitive side knew that I would also be sprinting to the best of my abilities to try to keep up with him.


I finished the race in 15:47:39! Success and overall a very good race. There were many familiar faces at the finish line which is always fun. 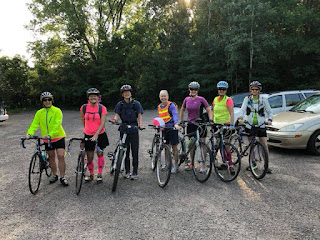